True Detectives was formed in 1985 by Jeff Taylor and his cousin Brenden (Stymie) Jemison. The original sound of the band was mostly a punk/pop sound. A mix of the Clash, early REM and Elvis Costello. With the addition of Mike McCann on Drums and Gino Leonardis on bass the band moved towards new areas such as reggae, funk and early rap. 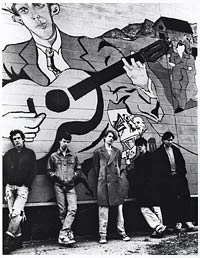 A few bass players came and went replacing Gino. The sound continued its development showing the talents of Jeff and Brenden as songwriters. In 1988 a friend of the band and former bandmate of both Mike and Gino, Aldo Noboa was recruited to fill in on bass for an upcoming gig, as their bass player had quit. After the gig the band retired to Mike's apartment for the traditional after gig festivities. There the band decided to add Aldo to their line-up, but not as the bass player, being that Aldo was a guitarist anyway as well as playing multiple other instruments. Brian Rhody was added as the bass player. Brian played with Aldo, Mike and Brenden in a freeform jam session that had become a regular thing for sometime.

The band relocated to Camden, NJ shortly after the addition of Aldo and Brian. The reason for this was twofold. Mike was in college in Camden and Philadelphia was right across the river. An excellent venue for the band to break into.

The band's sound continued to progress with the addition of the new members. The funk/hip-hop style began to surface more as well as reggae influenced world music. The stay in Camden was brief, only 9 months. The band moved across the river to Philadelphia and began to make itself known in the local music scene. The hip-hop style was well appreciated and the band began mixing heavy metal/rock into the styles creating a truly unique mix.

True Detectives was one of the first, if not THE first, bands to do live sampling. They accomplished this by learning a song they wanted to use for a sample and then "chopping" it into pieces to fit into a song as samples. A good example of this was the band's tribute to its favorite bands - TD's Intensely Relaxin' while others panic.

In the late 80's and early 90's True Detectives became one of the biggest bands in Philadelphia, selling out many shows and developing a devoted following with virtually nothing in the way of recorded material. The band played up and down the east coast during this time. Playing major cities such as New York, Philadelphia, Baltimore.

Toward the end of the bands stay in Philadelphia in 1991 there was interest from record labels such as CBS/Columbia, Alpha International, Island Records, and TVT Records. The band, feeling the record companies were not offering much in the way of support or promotion turned down these offers. After moving back to the NJ/NY area the band played New York City a bit more hoping to attract record offers. However shortly after playing during the College Music Journal (CMJ) in New York City, Brian Rhody had to quit the band. The band broke up shortly after that but reformed without Brian and Brenden a few years later. Steve Scavone, a long time friend of the band and guest member took over Brenden's duties on guitar. The reformed band played shows in Philadelphia and New York but broke up again soon after as the members were all located in different areas and logistics became a constant problem.

This website is devoted to the music of True Detectives. A band that was ahead of its time, and during it's brief existence helped to push the boundaries of music a little farther. Some members of the band keep in touch and contribute to this web site.

Brian Rhody - Bass
Brian currently resides in Florida with his family. He was involved in two bands in FL, but is currently not involved with any music projects. He is the webmaster for http://truedetectives.com/.
http://brianrhody.com
Aldo Noboa - Guitar, Vocals, Flute
Aldo migrated to the West Coast and now resides in California, he is currently the lead guitarist in the California based band SNOWBALL.
http://www.myspace.com/47424173
Brenden "Stymie" Jemison - Guitar, Vocals
Brendan is currently devoting his attention to painting and photography. He has been re-discovered in Taos, NM.

You can view his art at: http://www.brendenjemison.com/

Jeff Taylor - Vocals, Guitar
Jeff made an appearance on Jeopardy in 2005. Whereabouts are currently unknown, but we suspect the NJ/NY area.

Mike McCann - Drums, Percussion
Mike is currently working with his wife, Barbara, in a band called Barbiana Complex based in the New York City area.
http://www.myspace.com/barbianacomplex
Steve Scavone - Guitar, Vocals
Steve had been involved with TDs for a long time as a guest member, stunt guitarist and technical support. He joined as a full member in 1993 replacing Brenden. He is known as Krunch or Kapt. Krunch to his friends. Currently Steve is still in New Jersey still krunching away.

Robert Ferguson - Bass
Robert (Flyboy G, aka Ferg) played in two bands after the TDs, then got married and moved to DE. His current musical project is making horse-related parody songs for his niece.